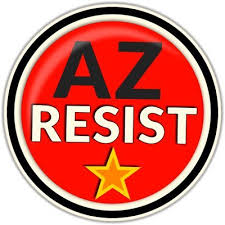 AZResist bills itself as “the only independent calendar covering social justice and progressive politics across Arizona.” Widely regarded as essential daily reading for the Resistance in Arizona, its co-founders Cyrus Tharpe and Julie Golding have used the calendar to funnel information to organizers, candidates, and activists since shortly after Trump’s election. It has become a hub for information about protests, canvassing events, voter registration, and educational events held by over 500 groups, and is nationally recognized as a model for progressive organizing. AZResist accepts donations at https://azresist.org

The Revolution (Relaunch): Julie, before we talk about AZResist I have to note that many people know you as the six-foot woman with the bullhorn at every protest.

Cyrus Tharpe: The reason you always see Jules at events with a bullhorn is that we would show up at these protests, and everyone would be shouting and you couldn’t hear what anyone was saying. There was a protest at the Fourth Avenue jail once, and I couldn’t hear them at all. So we got this PA system and we got these bullhorns, and she makes it her mission to make sure that people can be heard, which in a way is what the calendar and AZResist is about. Everybody has to be heard.

Julie Golding: We go to events and hand the bullhorns to people there. Sometimes they’re like, no. But then sometimes they change their mind and it’s really powerful. I remember we met this young woman at the Trump protest in October 2017. She was screaming her head off into our bullhorn, and we kept up with her, and now she does our Instagram and our data entry. Handing someone the bullhorn is an incredible thing. Seeing that change when they realize, holy shit, the power they have with their own voice. That’s what I love the most. And yes, that’s what AZResist is. It’s about amplifying voices.

TRR: Tell us about the founding of AZResist.

CT: What happened is that the election happened and I was pissed because I had been thinking that maybe Hillary would win and maybe she’d deliver on her promise to make college free for poor people and so maybe I could go to college. So I was pissed off, and I went to the state Democratic Party website and found out what legislative district I was in and found out about a meeting: LD 27 at 6 pm some night. I couldn’t get off work because I drive a Hazmat truck and no one could take my shift, but my wife could go. So she went along with like 40 other people and they’re all standing in this parking lot at 6pm on some weeknight at a rec center that’s locked.

So my wife calls me, and I decide to check the county Democratic website, and it turns out they’ve got a different address posted there. So I’m thinking, what’s going on here? And by the way it’s important that there’s 40 people who live lives like me and there’s no place for them to be heard and they’re never going to go back because they tried and this happened.

So long story short, we know that people who want to be politically involved, and if they use our calendar, they won’t show up at a parking lot and find themselves locked out. They know that if an event is on AZResist, we know who they are and that they are for real and that the information is right.

TRR: Why do you think the Democratic Party had bad information on their website?

CT: I think this is about socioeconomics. People in the affluent, educated, white people class have access to information because they have free time and they have time off in the evenings or the weekends to get saturated in information about what’s going on. But if you’re working-class, like the majority of people in the state, who make $15 an hour or less, we don’t have easy access to any of that information. I don’t think that the bureaucracy of the Democratic Party in Arizona thinks about providing information to such people. It’s not on purpose, they’re just not thinking about what it’s like to be working hard, treading water, struggling. If information about avenues for political expression is not easy to access and accurate, people who are blue-collar aren’t generally going to make it.

TRR: Speaking of economics, how is AZResist funded?

JG: Cyrus and I put in money every month ourselves. We don’t have financial backing, though on a few occasions some generous donors have funded us.

JG: Oh yes. We’ve got plans to step up our efforts, but yeah, it all costs money. One thing we did last time was to produce a voter’s cheat sheet, a document to let people know which candidates were the progressives, how to vote on ballot initiatives—everything so many of us were canvassing about for so long. By the way, that document was shared over 200,000 times online! We had it out for the general election, maybe a week after mail-in ballots came out 2018, but in 2020 we want to get it out even sooner and our real Christmas morning wish is to put it out in English and Spanish.

TRR: Do you think that running AZResist has offered you a perspective that might be less apparent to others? Has it made you aware of anything you wish more people knew?

JG: It being August, about two and half years or so into this administration, we’re all feeling beaten down. We all feel like every time [Trump] tweets or says something … every day it’s one more fucked up thing. And it’s easy to say, you know what? Fuck it, I’m done, I’m tired.

I want people to know that they’re not alone, but that the more he tweets, the more he says fucked up stuff, and I think it’s bolstering our ranks. Not all the people who voted for him are down with this. And when we do see or meet people who voted for Trump but who are now having second thoughts, it doesn’t matter what changed their mind about him. I think it’s very important that we not turn our backs on those folks, that we embrace them. We need them on our side.

So when you’re feeling beaten down, take a vacation for a little bit and then come back and become a precinct committeeperson. Join a group. Train to canvass and knock doors. We need you.