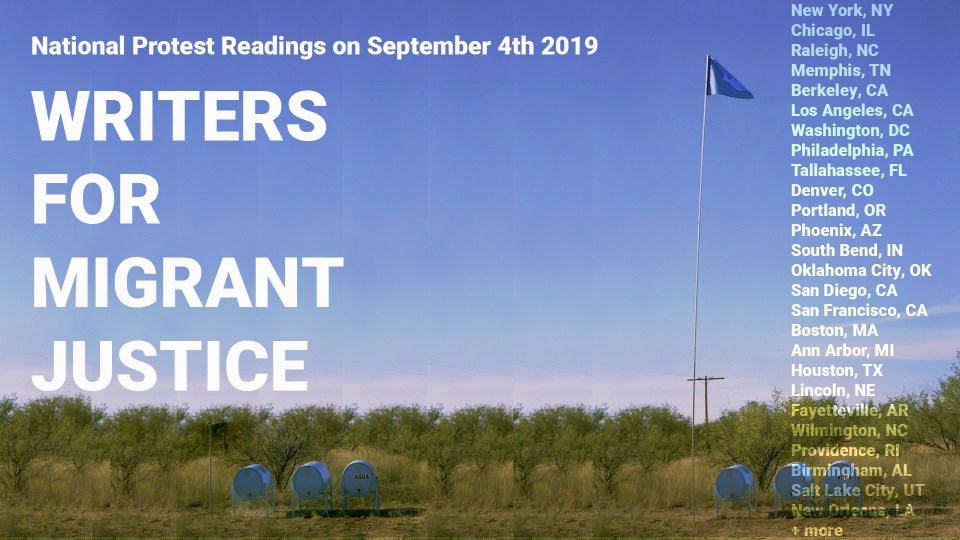 It started as a tweet by poet and activist Christopher Soto.

Soto, along with Javier Zamora, Jan-Henry Gray, and Anni Liu, were organizing a reading in New York, and he was calling for poets and writers around the country to organize their own readings as part of a movement he had dubbed Writers for Migrant Justice (WFMJ). Part social activism, part fundraiser, the idea was to bring writers together to share their stories of immigration, migration, detainment, and abuse, while simultaneously raising funds for an organization called Immigrant Families Together, a network of Americans committed to rapid response unification of families separated by the ‘zero tolerance’ policy.

Joel Salcido (MFA Poetry, ASU) was the first to respond to the tweet in Phoenix. Jake Friedman of the Virginia G. Piper Center quickly called a meeting of potential organizers, which included Raquel Denis, Ryan Greene, Rosaura “Chawa” Magaña (owner of Palabras Bilingual Bookstore), and Jamie Bonnell. Anna Flores hosted the event, which was held at the headquarters of the Phoenix-based human rights organization, Puente.

The room was packed on the evening of September 4th, and the poets ranged from students from the Girls Leadership Academy, to ASU graduates, to community members. Despite our state being plagued by divisive border politics for decades, there was a feeling of hope and solidarity in the air. Additionally, several local activist and aid organizations – including Puente, No More Deaths, Trans Queer Pueblo, Poder in Action, and The Revolution (Relaunch) – tabled at the event, distributing information and volunteer opportunities. In short, it was the kind of community effort we need to see more of in the literary world, especially if we believe that art can serve as a form of creative activism, even ignite a revolution.

In fact, WFMJ is reminiscent of the kind of social justice readings that seem to be proliferating in the era of Trump—from Writers Resist, to the Nasty Women Exhibitions & Readings, to the resurging interest in National Black Poetry Day (est. in 1985). WFMJ was just as powerful as its predecessors, and it seems that participants across the county are hopeful that it won’t be the last of its kind.

The following are the opening remarks for WFMJ, written by national organizer, Christopher Soto, which were read by the hosts of approximately forty WFMJ events across the U.S., all of which took place on September 4th, 2019.

According to NBC News, 24 migrants have died in ICE custody this year, as of June 2019. That figure doesn’t include the deaths of at least four immigrants who died shortly after being released from ICE custody. It also doesn’t include the deaths of immigrants held by other federal agencies, including at least five migrant children who have died while in the custody of Customs and Border Protection or the Office of Refugee Resettlement, a division of the Department of Health and Human Services charged with caring for unaccompanied migrant children who enter the U.S. As of June 2019, ICE detains more than 52,500 immigrants each day. It is very difficult for us to find the names of our deceased community members online because often the deaths of migrants are treated as a mere statistic and not the passing of somebody’s mother, father, sibling, cousin. As we have learned from the Black Lives Matter movement, it is important to say the names of our community members when they are taken by state violence. We want to acknowledge Black Lives Matter for their activism and for paving a way for migrant communities to also resist the detention and violence against us.

The names we are about to speak were provided by an LA Times Article which reported on six migrant children: five from Guatemala and one from El Salvador — who died in federal custody since from September 2018 to May 2019.

Most of the children died after becoming ill in Border Patrol’s crowded temporary holding areas.