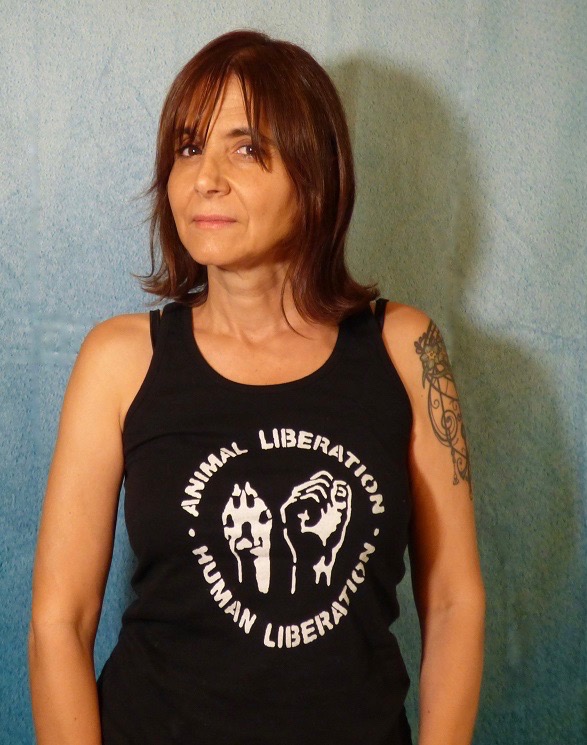 Scarlet Rescue could be mistaken for the name of a no-kill shelter, but Lisa Barca’s mission is a bit more punk and a lot more entertaining.

Lisa is a singer/songwriter and professor of literature who doubles as the frontwoman for the musical project Scarlet Rescue and who’s boldly advocating for “the liberation of all beings of all species.”

In addition to serving on the faculty of the Barrett Honor’s College at Arizona State University, Lisa is a force in the feminist underground. From her scholarly interests in animal studies, ecofeminism, and the practice of mindfulness and meditation, to her recently released 4-track EP, Animals and Other People, Lisa is a neo-riot grrrl rocker who’s writing some of the most overtly political lyrics around.

True to her ecofeminist identity, Lisa has work in the forthcoming collection, Meatsplaining: The Meat Industry and the Rhetoric of Denial (Sydney University Press), and her latest lyrical releases – “Barbecue Protest,” “The End of Tyranny,” “Clean and Clear,” and “Seeing Her Being Her” – are examples of her relentless “critique of harmful ideologies that keep oppressive conditions intact.”

Though Lisa’s been writing songs since the early 90s, much of her earlier work was about alienation. She admits that there were also “upbeat punk songs satirizing narcissistic guys,” but Lisa’s new EP is all feminism and veganism, with “both shap[ing] the liberatory ethos of the songs.”

For instance, “Seeing Her Being Her” includes a refrain that prompts a difficult (and critical) process of self-reflection: “Maybe you don’t like seeing her because you wouldn’t like being her/Would you mind seeing her if you wouldn’t mind being her?” The ‘her’ she’s referring to ranges from a homeless woman, to a college student who’s been raped, to a cow that’s had her calf ripped away. As Lisa states, the song “invites listeners to question the impulse to look away from injustice,” something we do as a result of “the personal discomfort [we feel when] witnessing it.”

A 20-year-vegetarian-turned-vegan, Lisa made the transition – which some still consider “radical” despite the large body of research that links diets high in animal proteins to a variety of cancers (Toumpanakis, Turnbull, Alba-Barba, 2018) – in the spring of 2017 after witnessing a video of a calf being taken from her mother. “The mother was bellowing and chasing after her baby…[and] I found out this is standard procedure: mothers and babies are separated so humans can take the mothers’ milk to sell it for profit…I couldn’t believe that I hadn’t been aware of the violence and oppression of the dairy and egg industries…but of females especially.”

Lisa’s disgust for these practices has evolved her into a fourth-wave ecofeminist heroine, though she acknowledges that she’s just following in the footsteps of “a host of first-wave feminists who were vegetarians, advocated for animal rights, and opposed vivisection—a few examples being Frances Power Cobbe, Charlotte Perkins Gilman, and Susan B. Anthony.” Still, our foremothers weren’t writing songs called “Barbecue Protest,” a ditty in which the speaker refuses to play nice with those who won’t acknowledge the fact that our culture revolves around the unnecessary torture and killing of sentient beings.

I’ve been on the outside for a long time
which makes me less concerned about your approval
If my vision meets with your derision, you’ll be flagged for removal.

It’s difficult to not draw parallels between the speaker’s vegan-as-outsider status and a host of other marginalized identities; and whether or not that was Lisa’s intention, her lyrics smack of something that transcends status quo group-think, which is exactly what the feminist movement needs—inclusivity and the recognition of universal human concerns.

Equally important is the fact that Lisa has used art as a way “to create meaning amidst what has often felt like an inhospitable and hostile social environment…Drawing on this, “Barbecue Protest” reflects on the social stigma of being vegan and, more generally, of standing by one’s principles, especially when they are unpopular.”

When Lisa considers where feminism is today, how connected it is to both the ecological and political crises we’re facing, she says the response is clear: “we have to do more than simply get more women into positions of power…the entire system needs to be dismantled and replaced, and among the various feminisms, ecofeminism comes closest to providing a vision of what a non-violent, non-predatory world might look like.”

We’d like to experience that world, too, but for now, we’ll have to settle for the raucous cry for liberation that Animals and Other People provides. Download it here and ignite your own revolution: https://scarletrescue.com/