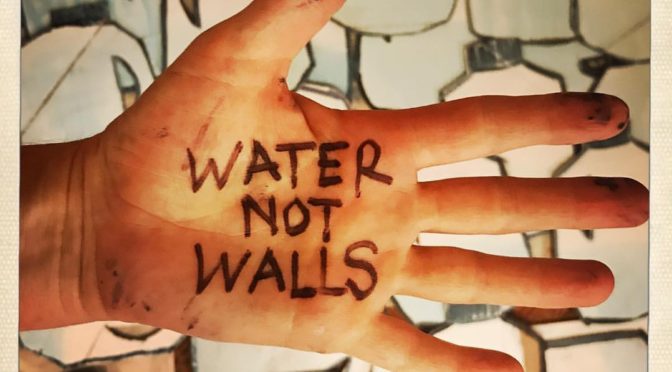 No More Deaths, or No Mas Muertes, is an organization based in Tucson and Phoenix that supports migrant lives by scheduling “drop-offs” of water, food items, and other essentials along known migrant trails across southern Arizona. Recently, a court found Scott Walker, a faculty member in geology at Arizona State University who was working with NMD, not guilty on federal charges after Walked was arrested for assisting migrants near Ajo, AZ.

Chris Fleischman, a  volunteer with No More Deaths since 2006, recently discussed this development with The Revolution (Relaunch) (TRR) along with other circumstances faced by the organization.

TRR: What does it mean that Scott Warren has been found not guilty?

Chris Fleischman: It’s a resounding victory, because the jury came back with this decision after like two hours of deliberation, so it would seem that the government was way out of line in bringing those charges against him. So that gives us a lot of confidence as we continue our work. I mean had he lost we would have sought an appeal in the ninth circuit where we have always won. But it was better to have it done so quickly.

TRR: What had Warren done? What was the government trying to hold him accountable for?

CF: My understanding is that he offered assistance to two migrants who were exhausted from exposure along their journey and he brought them food and medical assistance. He offered them what they needed to be comfortable and to recover.

TRR: Can you tell us why so many people are dying in the desert now? Why has the death toll spiked since the late 1990s?

CF: Before NAFTA and before 9/11, coming into the United States probably meant coming through a regular checkpoint and maybe overstaying a visa, or maybe going back and forth on a regular basis. People used to do this, living on both sides of the border, you know, and it didn’t seem to cause either government much concern.

But after 9/11, they launched Operation Hold The Line and Operation Gatekeeper, which made it pretty much impossible to cross from Tijuana into San Diego or from Juarez into El Paso, and a similar thing happened between Nogales/Sonora and Nogales/Arizona, making it pretty hard to come across the fence that was there. So people were funneled out into the desert areas, where they had a better chance of making the crossing unseen, but most people who do it don’t get the truth from their guide or coyote—they are told it will be much easier than it really is. So those who come unprepared for a nine- or ten-day journey often die, because they’re left behind by people who have no scruples about leaving them.

TRR: So how did No More Deaths form?

CF: There were other organizations that recognized people were dying, and that they needed to do something about it. Those organizations, like the Samaritans and Humane Borders, formed a coalition, and they would put water in strategic places in big barrels where people could refill their bottles. But No More Deaths formed because they thought it really wasn’t enough, that they needed to go out and camp in the middle of the desert and look for trails and keep replenishing supplies of water, canned food, fresh socks, and other things. Because the numbers of deaths were still spiking in spite of those other efforts.

TRR: Is it illegal to leave water in the desert to assist migrants?

CF: No, though you’re not allowed in some areas without a permit. Those permits have gotten stiffer in terms of what you’re allowed to leave behind, but we and our lawyers are going to maintain that leaving water behind is life-saving—we’re going to continue to do it. I was charged with littering once, actually.

TRR: Can you tell me about a particularly memorable experience you’ve had doing this work?

CF: [pause] I do remember once running into some really young guys near Arivaca; I think they were brothers. These two had decided they had had enough and they just wanted to be turned in to Border Patrol. In those days we would call Border Patrol to let them know when this happened, so that we wouldn’t be arrested for transporting people into the country when, in fact, we were taking them southward to border authorities.

But when this happened, sometime after 2008 when Operation Streamline began, we also wanted to try to let such people know that Streamline would basically put them into a kind of kangaroo court that would likely take away their right to ever enter the United States again, so those guys were probably banned forever.

TRR: What can supporters do to help No More Deaths?

CF: We definitely need feet on the ground to make trips into the desert and to place water and other aid. We need people to help make sure our vehicles are up and running; we need people who can not only carry water but to lead trips—in the Phoenix area especially.

Of course, we always need money as well, and also people to table for us and help get the word out about what we do at churches, at First Friday, and so on. People can find information and a donate button on our Facebook page at No More Deaths PHX.